Amma – the mother of hugs & compassion

“If it is one man’s karma to suffer, isn’t it our dharma (duty) to help ease his suffering and pain?” 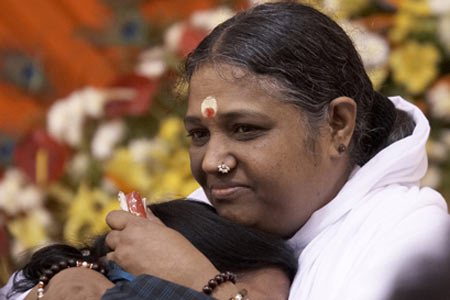 Did you know that 3% of each entry from the Barcelona Yoga Conference will be donated to Amma Embracing the World?

Have you ever wondered what unconditional love and devotion would feel like?  It is beautiful to think about it, a cozy feeling arises, right? But it is not easy to aspire to find these supreme qualities in a terrestrial experience because it is not simple to imagine how these would be acknowledged through our earthly senses, the bases of how we normally experience life.

Some believe to have experienced love without limits and compassion in the presence of Mata Amritanandamayi otherwise known as “Amma” (mother). Amma is a humanitarian and spiritual leader, founder of the global network of charitable projects “Embracing the World“.

This inspiring woman has dedicated all her life to alleviating the pain of the poor, and those suffering physically and emotionally. She proclaims that her religion is love. She has never asked anyone to change their religion but only to contemplate the essential principles of their own faith and to try to live accordingly. 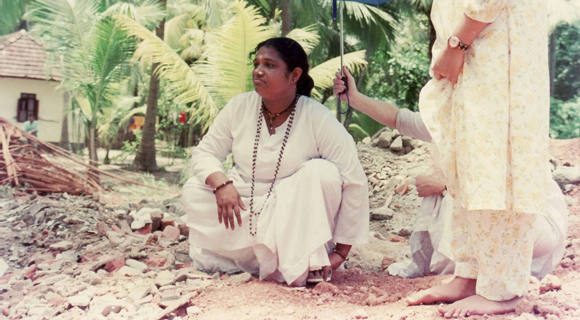 Amma was born in 1953 in Kerala, South India, in a village in the coast. Since a very young age, she was attracted to spiritual practices and composed devotional songs inspired by the beauty of nature and the sea around her.  Fatefully, she grew up among poverty and suffering and was deeply affected by it and would always do her best to try to alleviate the suffering of those around her. She would repeat: “If it is one man’s karma to suffer, isn’t it our dharma (duty) to help ease his suffering and pain?”

Mata refused to get married despite her parent’s attempts to arrange a marriage for her, her life took a different path. In 1981, drawn by her powerful convictions, service vocation and practices, seekers begun approaching her parents’ property wishing to become her disciples.  In this same year, the Mata Amṛtānandamayī Math (MAM), a worldwide foundation, was founded.

In 1987, she began travelling around the world sharing her message of unconditional love and compassion and embracing all that are suffering through hugs. She continues to do so at the present and participates and supports may humanitarian projects and charities through Embracing the World, a global network of local and regional charitable organizations and projects active in more than 40 countries around the world.

In 2014, she met with major Anglican, Catholic, and Orthodox Christian leaders, as well as Jewish, Muslim, Hindu, and Buddhist leaders to sign a shared commitment against modern-day slavery organized by the Global Freedom Network.

I think it´s wonderful that on top of being able to share a whole week of Yoga with great teachers, convicted practitioners and friends; your contribution will support the sustainability of the Amma´s lifework and initiatives!

Thank you to BYC organizers and supporters for giving us a chance to know about this mission and for giving us an opportunity to be compassionate and share in solidarity!