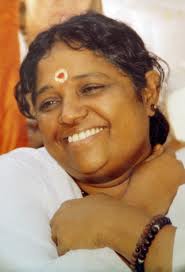 On the morning of the 27th of September 1953, in a small poor fishing village, Parayakadavu in the Quilon district of Kerala, a baby girl was born. Her parents gave her the name Sudhamani. She came into this world not in tears as babies usually do, but with a beaming smile on her face, as if prophesying the joy and bliss she was to bring to the world.

Born in a poor fishing village in Southern India and educated only up to the fourth standard, Amma now directly administers a vast network of charitable activities, serves as spiritual master to thousands of monks and nuns, mother to millions of devotees across the globe, spiritual advisor to the international community of nations and religions, and protector of the true spirit of India’s Sanatana Dharma.

This attitude of selflessly serving all creation, knowing others to be extensions of one’s own self, Amma refers to as vishwa matrutvam—universal motherhood. And it is to this pinnacle of human existence that Amma is trying to awaken the world through her life, teachings and darshan [divine embrace]. 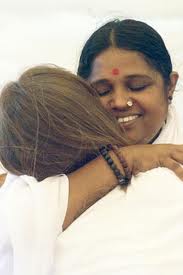 Humanitarian, Mother, Friend, Guru, God…people see her differently. Amma has offered herself to the world. In reality, she is beyond all such roles, knowing her true nature to be the true nature of us all—the blissful divine consciousness that pervades this universe. But out of her infinite compassion, Amma comes down to the level of whoever is standing before her—the poor, the lonely, the seeker—in order to give what is desired, what is needed. It was for this purpose alone that Amma was born and for this alone that Amma lives today. In fact, her wish is to be lovingly caressing someone, consoling them and wiping their tears even when she breathes her last.

Since 1993, Amma has been increasingly recognised by the international community as a treasured repository of practical spiritual wisdom, who has the capacity to guide the world towards a better, brighter future. She has been a featured speaker at the United Nations on three occasions, most recently when she was presented with the 2002 Gandhi-King Award for Non-violence. Presenting the award, Dr. Jane Goodall referred to Amma as “God’s love in a human body.”

Amritapuri, the Ashram of Amma 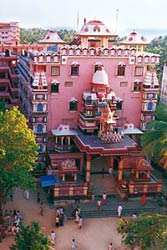 Built up on the very property where Amma was born, Amritapuri is now the headquarters of her worldwide mission and the spiritual home for her monastic disciples and hundreds of householder devotees. All the residents have dedicated their lives for realizing God and serving the world. Everyday, Amma’s children from across India and abroad flock here to have her darshan. She sees each and every one, listens to their worries, consoles, encourages, and provides new direction to their lives. Amritapuri is the living example of the ancient Indian ideal “the whole world is one family” (vasudhaiva kutumbakam). Here you will find people from all parts of the world — speaking different languages and having different customs and religions — all living under one roof. In their quest for the meaning of life, each has forgotten their differences and become a child of Amma.

“Children, this ashram exists for the world; it belongs to you, to all the people who come here.” –Amma

Amma as an inspiration to the BYC

Swami Shubamrita Chaitanya with his presence will be a blessing for the first Barcelona Yoga Conference. He has lived with Amma as a monastic disciple since 1989 and regularly gives lectures and seminars on stress management and meditation throughout Europe, Australia, Africa, India and the Middle East. Drawing on more than 20 years of experience as one of Amma’s closest disciples and personal translators, Swami Shubamrita shares his understanding of the Eastern spiritual traditions in practical and easily understandable terms.

Barcelona Yoga Conference has the goal to maintain a sustainable living in the world around us. Therefore 3% of each ticket will be donated to Amma’s ashram and 2 more conscious projects.